Implementing a job queue in Rust

I recently finished my first rust project - a command line utility called “bandwhich” that displays network utilization information. As a newcomer to rust, this project offered quite some challenges for me. This post is a write up of one of them, going into detail on the parts that I personally found most difficult to understand. I hope it will be the first of many. If you’d like to check out the utility itself and browse its source, you can find it here

I try to always be very open to new ideas and better or different ways of doing things. If you have any thoughts, please do drop me a line! :)

In this first post, I’d like to talk about implementing a job queue to resolve IPs into their hostnames by querying a remote DNS server.

A little bit about “bandwhich”

“bandwhich”’s purpose is to help keep track of and debug issues involving network traffic. Like a network sniffer, it listens on a given network interface and records traffic. It then continuously displays information (eg. bandwidth) by process, connection and remote network address in a terminal UI.

Why do we need a queue?

When “bandwhich” displays information about a network address, it would ideally like to display an “easier on the eyes” hostname rather than an IP address (eg. “dns.google” instead of “8.8.8.8”). To do this, it uses libc’s getnameinfo function. Unfortunately though, this function blocks the current thread. Waiting for it to return before displaying information would be a bad user experience.

For this reason, we elect to have a best effort resolution. Whenever we encounter a previously unknown IP address, we place it in a queue and have a different thread read it and resolve it. We display the raw IP address until it is resolved, and its hostname once we know it.

We’ll be concentrating on implementing the queue itself. The resolution and recording of the host addresses are out of scope for this post.

How does the queue work?

The queue consists of several components that work together to achieve the functionality we desire. 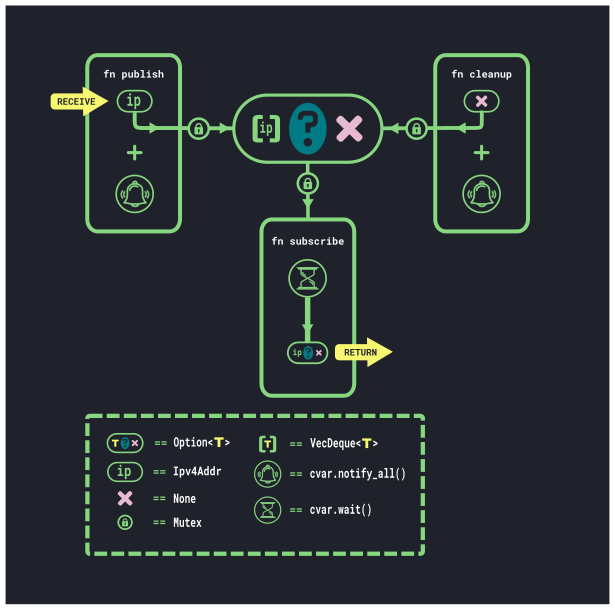 The VecDeque is a data structure from the std library. Like a normal Vec, it’s a growable list on the heap memory, and unlike Vec, it’s double-ended. Meaning that adding/removing elements from its beginning or end is a relatively cheap operation. For more information, take a look at the official docs

In our dns queue, its role is to keep track of the ip addresses we need to resolve. We push an address onto its end when we want it to be resolved, and pull an address from its beginning when we want to resolve it.

The condvar (conditional variable) is our alarm clock. It allows us to block a thread in one place and wake it up in another: the official docs

The mutex is what we use to wrap data in order to make sure different threads can read to and write from it safely. It will only let one thread access it at a time. In our case, we use it to protect the Option<VecDeque>. Here are the official docs

We want to start with a struct that has a jobs queue and a conditional variable.

Our jobs are a Mutex wrapping an Option<VecDeque> of Ipv4Addr. As mentioned earlier, we represent our queue as an Option so that we could let our subscriber function know it can stop listening by switching the Some(VecDeque) for a None value.

Next, our publish function - called here “resolve_ips” to convey more information in the code using our queue:

Here, we receive a list of IPs, and then:

Now, our subscribe function. Here, we call it “wait_for_job”:

We sleep by moving our MutexGuard (jobs) into the Condvar and reassigning it to the Condvar’s return value. The Condvar unlocks the guard, thus freeing it for writing. When it returns, we repeat this process, so that if it returned prematurely, we’ll simply sleep again.

We have to re-check our queue every time we wake up, because at times the wait function will return without actually being woken up, for more info check out the last paragraph in the docs

Finally, our cleanup function, called “end” in our case:

Putting it all together

It’s worth noting that our implementation uses a dns resolution queue of Ipv4Addr. This is the specific case of “bandwhich”, but this queue could also be used with a Generic T type instead of an Ipv4Addr for other uses.

Thanks Mara Bos for the helpful comments.

Some diagram icons made by Those Icons and Smash Icons from https://www.flaticon.com